Boeing earlier this week instructed airlines to pull a batch of eight recently-manufactured 787 Dreamliners from service, prompting their immediate grounding, after the plane maker determined that a manufacturing issue undermined the strength of an area of the jet’s carbon fiber composite structure.

So far, eight 787s — all built in the last few years — have been withdrawn from flying. Aircraft for United Airlines, Singapore Airlines and Air Canada are impacted by the impromptu grounding, according to a person familiar with the situation.

Boeing confirmed to The Air Current that it has “identified two distinct manufacturing issues in the join of certain 787 aft body fuselage sections, which, in combination, result in a condition that does not meet our design standards.”

According to those familiar with the issue, an area of the structure in the rear of the aircraft is unable to withstand the maximum stress that would be experienced by the aircraft in service and could fail.

“We determined that eight airplanes in the delivered fleet are affected by both issues and therefore must be inspected and repaired prior to continued operation,” said a Boeing spokesman in a statement to TAC.

This new issue is the first publicly known instance in the jet’s nine year service life that a structural defect with its mostly carbon fiber airframe has caused Boeing to immediately withdraw 787s from service. The 787 fleet was grounded for three months in 2013 following the overheating of lithium-ion batteries. At that point, the global cadre of 787s was just 50 airplanes and the jet returned to operation after the company developed a new containment and venting system for the main and auxiliary power unit batteries inside the jet’s electronics bay.

The source of the newly-discovered structural issue has been traced to a mating point inside the aft fuselage between two carbon fiber composite barrels, known as Section 47/48 where the two barrels meet with a large bulkhead that caps the pressurized cabin. The pieces are fabricated and joined with the aft pressure bulkhead at Boeing’s North Charleston, S.C. plant and then delivered for final assembly to the company’s nearby final assembly building or flown to Everett, Wash. 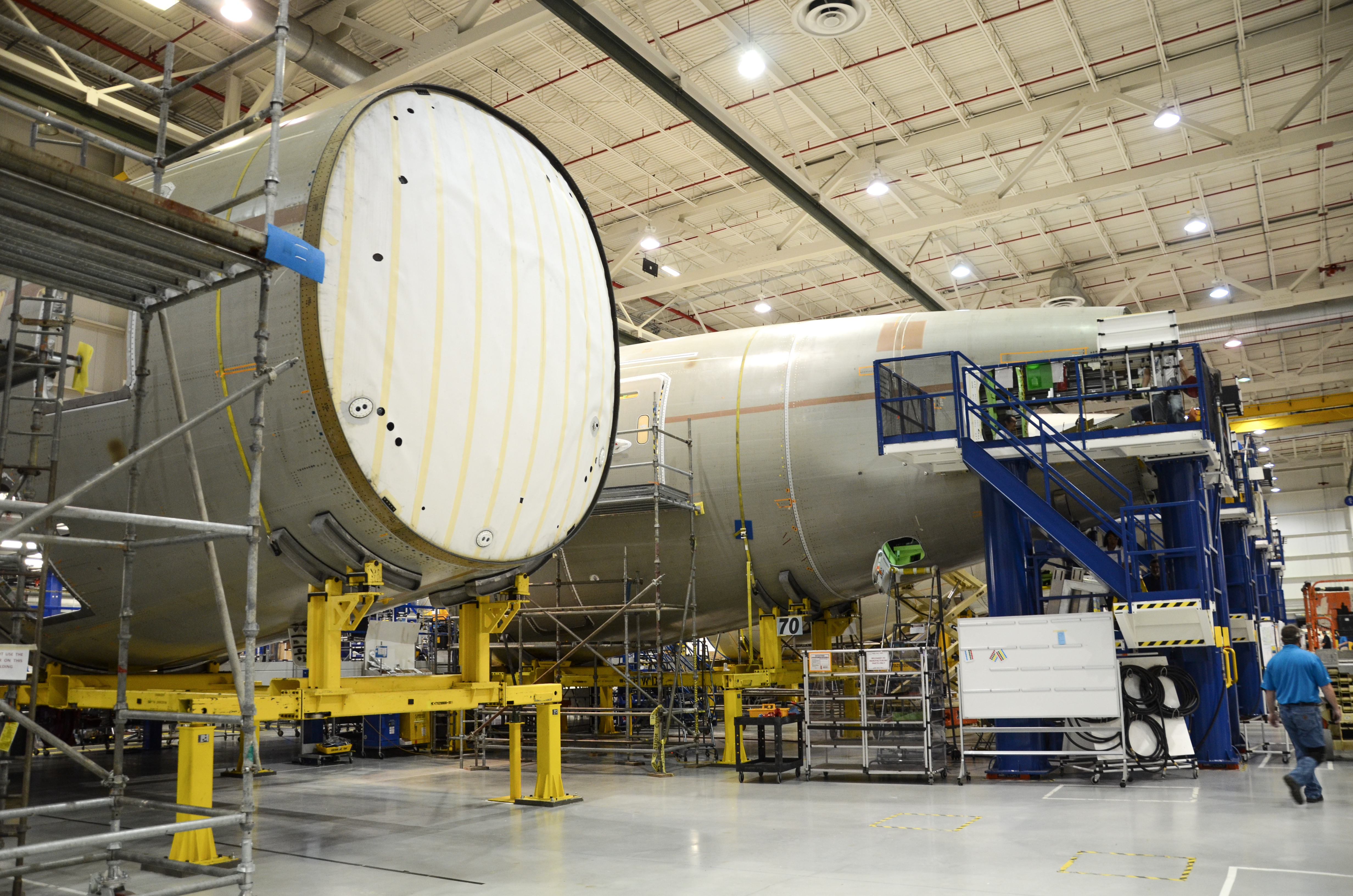 The large white structure is the pressure bulkhead inside the Section 47 barrel of the 787 Dreamliner. The unpressurized section 48 is then mated to section 48 before shipment to final assembly.

Today, the 787 fleet is nearing 1,000 aircraft and over the last decade has become the backbone of international air fleets. While long-haul operations are still down sharply since the start of the COVID-19 pandemic, the 787 fleet globally has seen a stronger resurgence in operations from the April industry trough, relative to older twin-aisle aircraft like A330s and 777s, but global 787 capacity is still down 64% from August 2019, according to OAG. Some of the fuel-efficient twin-aisle jetliners have been repurposed for all-cargo operations as travel restrictions have significantly depressed international air travel.

Related: Aircraft out of storage and into the frying pan

The first of the two issues causing the issue centers on how naturally occurring gaps in the structure are filled with shims that ensure stresses on the airframe are carried as they’re designed. Boeing has used a predictive shimming technology on the 787 program for more than a decade, robotically laser scanning the surfaces around the structural joins to automatically generate the required shims to fill the gaps.

In the case of the eight withdrawn aircraft, the gaps were improperly filled. On their own, that might not produce an immediate issue, but Boeing said a second manufacturing issue has prompted the pulling of the jets. The second issue centers on the inner skin of the large monolithic composite barrels. On the suspect aircraft, the skin of the woven carbon fiber fuselage is “supposed to be smooth enough so there are no abrupt ridges,” said one person familiar with the issue.

The company “conducted a thorough review of the manufacturing data with respect to both shimming and skin surface profile. Based on that analysis we were able to determine that both conditions affected these eight airplanes only,” said the Boeing spokesman, who added that it has notified the Federal Aviation Administration “and are conducting a thorough review into the root cause.”

When the gaps are improperly filled in combination with the roughness of the inner skin, the required structural strength does not meet the limit load requirement. Limit load is the maximum expected stress the aircraft would ever expect to experience in service. While limit load is not solely an airline service requirement, every commercial aircraft test program has to demonstrate an aircraft’s structure is designed for limit loads before it can be safely cleared to fly for the first time.

“The rest of the in-service fleet has been determined to meet limit load capability,” said the Boeing spokesman, who added a repair is “in the ballpark of two weeks” per plane. The Boeing spokesman added that it has “modified our production and verification process to ensure we are building conforming product.”

Limit load is a far lower structural requirement than the much more violent ultimate load requirement to withstand two and a half times or 150% of the harshest conditions the aircraft would ever experience in flight.

Over the longer term, the gaps left by improper shimming can put added stress at certain points in the structure that can cause unexpected fatigue cracks to develop and propagate. The Boeing spokesman said its engineers “are analyzing data on the in-service fleet to determine if action is required, potentially including more frequent inspection or rework. It could also be determined that no further action is required if the condition is found to not impact the longevity of the structure.”

The planes were pulled from service earlier this week after the company discovered the issue over the weekend. “Once we became aware of the situation, we immediately contacted the airlines that operate the eight affected airplanes to notify them of the situation,” the Boeing spokesman added.

A spokesman for the FAA said that the U.S. aviation regulator “is aware of the matter and continues to engage with Boeing,” according to a single-sentence statement.

“Singapore Airlines is aware that one of our Boeing 787-10 aircraft is affected by this technical issue,” said a spokesman for the airline. “The aircraft is not in service and we will work closely with Boeing on a solution.” United Airlines and Air Canada did not immediately respond to a request for comment.

Installation of the shims across the 787s structure have been a recurring challenge for Boeing. Prior to the 787s entry into service, in June 2010, improperly shimmed horizontal stabilizers temporarily grounded Boeing’s test fleet. And the issue, according to several Boeing manufacturing engineers and aircraft assemblers familiar with the situation say the structural shimming has been a longstanding challenge for the company’s South Carolina manufacturing operation.

“Don’t get me wrong, it’s hard to do,” said one engineer. “But they are so hellbent on making rate, sometimes engineering and production aren’t aligned.” In 2012, early in the 787’s production run, Boeing found more than a dozen improperly shimmed longerons, structural stiffeners, inside the same 47/48 section requiring inspections and localized repairs for structural delamination.

“Safety and quality are Boeing’s highest priorities; we are taking the appropriate steps to resolve these issues and prevent them from happening again,” the spokesman said.

The recurrence of shimming issues on the Dreamliner program comes as Boeing is considering consolidating 787 final assembly operations exclusively to South Carolina. The North Charleston, S.C. factory that produces the aft fuselage where the structural issue was introduced builds the section regardless of where final assembly is completed.

Once scarce, coronavirus creates a glut of unneeded airliners

Aircraft out of storage and into the frying pan

Two manufacturing issues compromised an area of the structure in the rear of the...