Instant messages exchanged between two Boeing technical pilots on the 737 Max program from November 2016 openly discuss the “egregious” behavior of the aircraft’s Maneuvering Characteristics Augmentation System (MCAS) late in the development of the single-aisle jet and lamented the apparent falsehoods in communication to the Federal Aviation Administration.

The revelation comes 354 days since the crash of Lion Air 610, which triggered the most severe safety and leadership crisis the company has faced in its 103 year history. A second crash in March of Ethiopian Airlines 302 forced the grounding of the 737 Max. The crashes killed a total of 346 people.

The FAA in a statement said it was made aware of the exchange Thursday, October 17, despite Boeing’s awareness of the document for “months”.

According to the document, the conversation between Forkner and Gustavsson took place on the evening of November 16, 2016. The 737 Max was officially certified by the FAA on March 9, 2017 following its first test flight in January of the previous year.

In a back and forth set of instant messages, Forkner wrote, “Oh shocker alerT! (sic) MCAS is now active down to M .2” a reference to the need to use the flight control system at a significantly lower speed than first anticipated, adding: ”It’s running rampant in the sim on me”

Gustavsson replied “Oh great, that means we have to update the speed trim descritption [sic] in vol 2”

Forkner, less than a minute later wrote in response, “so I basically lied to the regulators (unknowingly)”. Forkner has been at the epicenter of the 737 Max crisis after asking the FAA on March 30, 2016 to have the description of MCAS removed from documentation for the aircraft.

“it wasn’t a lie,” wrote Gustavsson. “no one told us that was the case”

The pair then describe the “egregious” behavior of the system designed to match the handling characteristics of the 737 Max to the earlier 737 Next Generation close to a stall.

Forkner, apparently in jest, wrote “granted, I suck at flying, but even this was egregious”

Gustavsson replies “No, i think we need aero to confirm what its supposed to be doing”

Forkner said a colleague named Vince “is going to get me some spreadsheet table that shows when it’s (eds note: presumably MCAS) supposed to kick in. why are we just now hearing about this?” 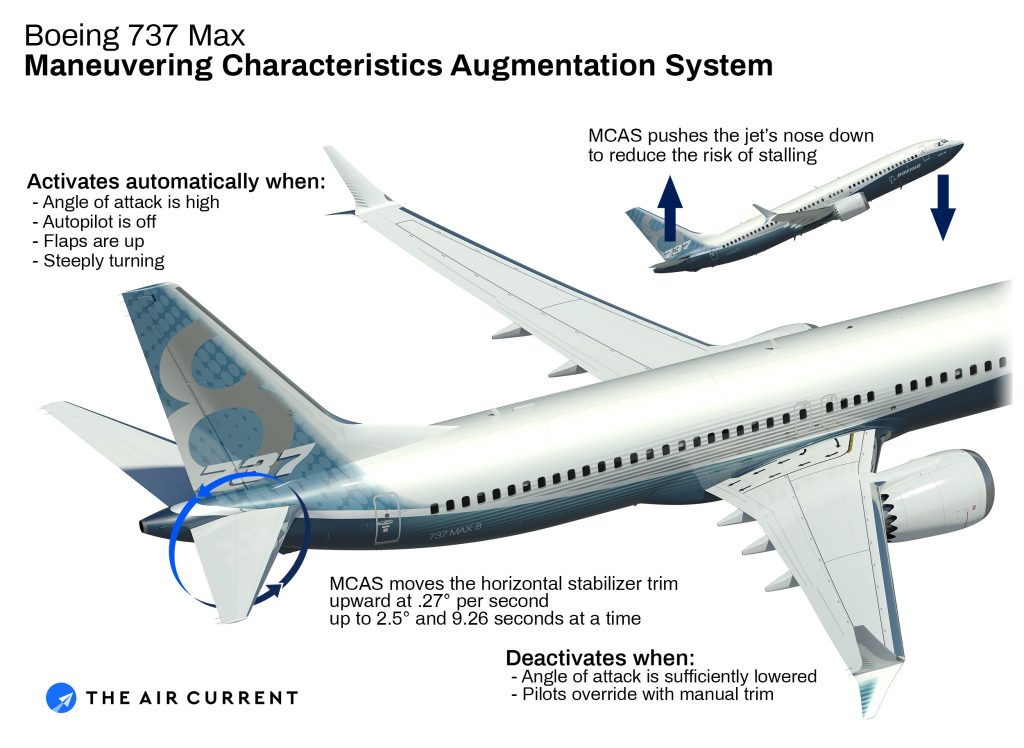 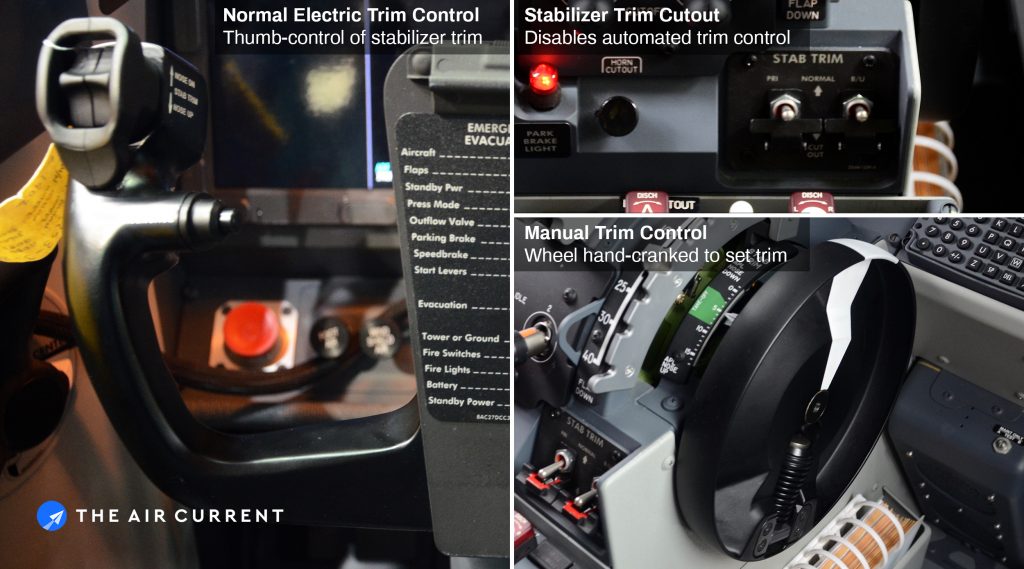 Gustavsson then says he wasn’t sure but “the test pilots have kept us out of then loop” adding “it’s really only christine that is trying to work worth us, but she has been too busy”

Forkner replied a moment later “they’re all so damn busy, and getting pressure from the program” Gustavsson responding: “That is true, I wouldn’t want to be them” 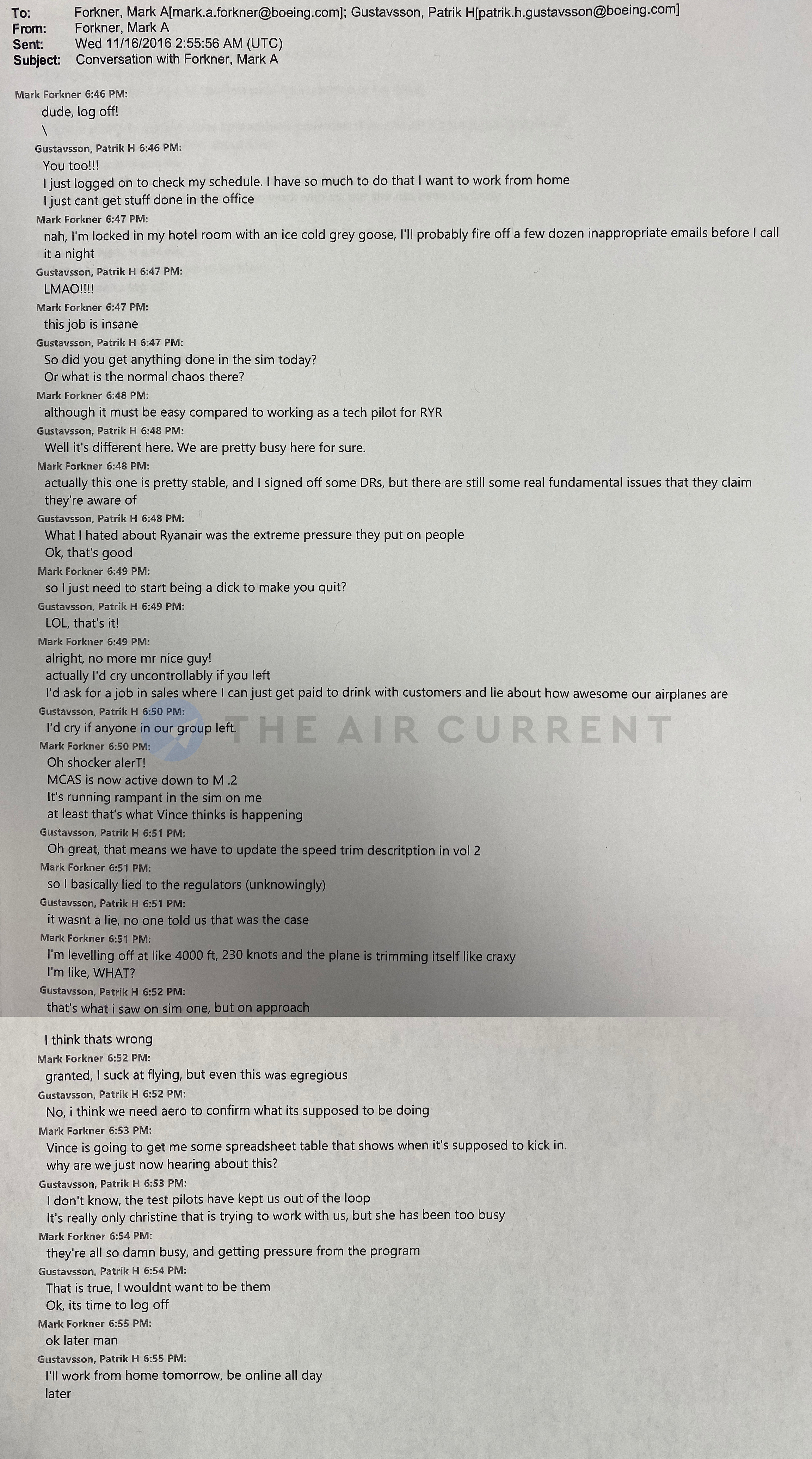 The existence of the messages between Forkner and Gustavsson became known to the FAA late Thursday, prompting a terse letter from administrator Steve Dickson to Boeing chief executive Dennis Muilenburg demanding an explanation about the document which the FAA said the company “discovered…in its files months ago.”

“I expect your explanation immediately regarding the content of this document and Boeing’s delay in disclosing the document to its safety regulator,” wrote Dickson. 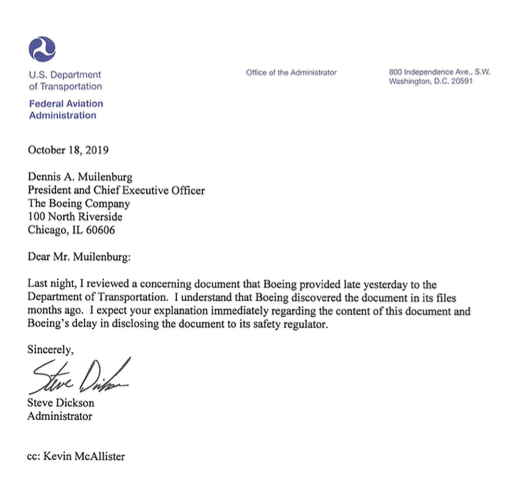 Muilenburg was stripped of his board chairmanship last week. The documents were first reported on by Reuters.

The FAA in a statement on October 18 said the aviation regulator “finds the substance of the document concerning. The FAA is also disappointed that Boeing did not bring this document to our attention immediately upon its discovery. The FAA is reviewing this information to determine what action is appropriate.”

The exchange was apparently supplied to the Department of Justice in February, according to The Seattle Times, but said Boeing has been trying to get Forkner to explain the exchange “without success.” Forkner asserted his Fifth Amendment right against self-incrimination as part of the probe by federal prosecutors.

Boeing in a statement said as part of its “voluntarily cooperating with the House Transportation & Infrastructure Committee’s investigation into the 737 MAX…today we brought to the Committee’s attention a document containing statements by a former Boeing employee.” The company said it will continue to cooperate with the investigation.

Related: Searching for 40-year old lessons for Boeing in the grounding of the DC-10

Larsen said that it is his expectation that wholesale changes to the FAA and its certification process are coming through Congressional action and is expected to be an outgrowth of the ongoing investigation by the House T&I Committee’s investigation.

“These text messages and the [Joint Authorities Technical Review) report and the NTSB recommendations from a few weeks ago and I think even the changes that Boeing itself is making and their safety and engineering organizations show that there is something wrong with the current state of the law on the certification and delegation authority that the FAA has.”

Muilenburg is currently scheduled to testify in front of Congress on October 30. Larsen said getting an answer on why the FAA and the committee’s investigation were only made aware of the messages on October 17 — months after the DOJ — is near the top of his planned queries.

Related: Checklists come into focus as pace-setter for 737 Max return

The explosive document adds more doubt to the timeline for the return to service of the 737 Max. Southwest Airlines and Air Canada both extended their cancellations to early February. The Air Current reported last week pilot evaluations of checklists and procedures were among the key pacing items as the aircraft advanced toward final approvals by the FAA.

“Assuming the technical changes are largely complete, the MAX still has to return to service with some confidence among the public that it is safe and that institutional changes mean something like this won’t happen again,” wrote J.P. Morgan aerospace analyst Seth Seifman. “Today’s news is a step backward.”

Airbus makes a case for disruptive stability in the A321XLR